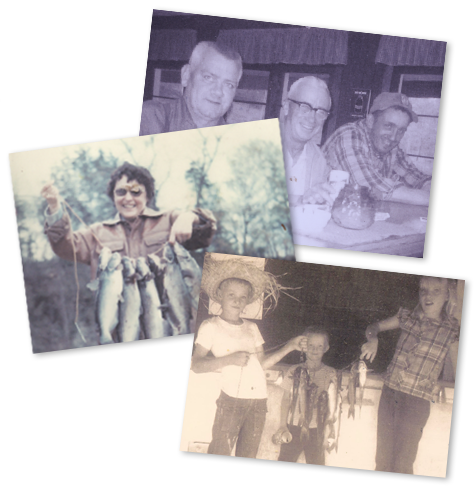 Back in 1969, my Dad, Clayton Kuhlman traded a house in Maquoketa for this farm. He liked to do a little farming on the side and my step-mother liked to camp and fish. So, to keep both of them happy, he built a pond and stocked it with catfish.

He put a small camper on the hill so she could fish and he could farm. The fish that he stocked were so nice that word began to travel. People started to come from all around to check out the property and inquire about fishing. In 1971 he began to sell the right to fish his pond. That led to the need for refreshments. He hired a couple of guys to build the one-room snack area where people could get a sandwich or have the catfish they caught cooked.

The building was put up at very little cost. The men worked for $2.00 an hour and all the beer they could drink. If you notice, when you come in the building, the right corner is 8” higher then the left side. Maybe they had a little too much beer! People of the town called it “Clayton’s Folly” but Dad proved them wrong when the International Coon Dog Association contacted Dad about a national field trial to be held here. This produced a need for a real kitchen, so one was built and the menu was expanded.

I joined my Dad in 1972 and was thrown into cooking which I knew nothing about. With much trial and error, I began to do okay. In 1977 my Mom and Stepfather, Don Reese, purchased the property from my Dad on a hand shake. A contract wasn’t even written for a few months after Don took possession.

I bought the business from Don in 1989. Dad and Don both passed away in 1993 one month apart. Everywhere I look I see Dad’s dream and Don’s hard work. My son, Kory, is becoming involved with the business and hopefully some day he will carry on and keep up the tradition of “Clayton’s Folly.”